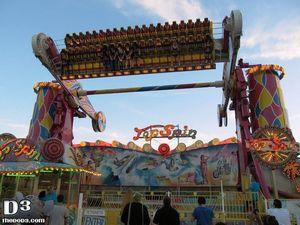 Top Spin is a massive amusement ride manufactured by Huss Rides of Germany. The ride debuted in 1990 and has not only been a hit on European midways, but also at theme parks around the world.

The ride is made up of two arms with a large gondola slung between the two. On the opposite ends of the arms are two counterweights. On portable Top Spin 1 models, two large tanks flank the supports that act as a ballast for the ride. Top Spin 2 models do not have this feature.

Most traveling Top Spin rides retain their original name or add something onto the name such as “Top Spin Fresh.” Themeing usually consists of surfing artwork despite “top spin” not being a term used in surfing. Conversely, theme park Top Spin rides almost never keep their original name. Some names chosen include Twister, Hang Time, and Tomb Raider: The Ride (now The Crypt) among others. 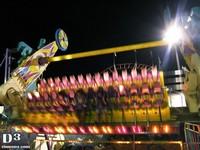 The riders choose one of the two rows, and move all the way to the end so others can get into the seats. Riders are secured by two restraints, a shoulder harness and T-style lapbar. When the lapbar comes down, it’s almost standard fare to hear at least a few riders wail in exaggerated pain. They are indeed very snug, but considering how much hangtime riders are subjected to, I’d rather they be tight!

The cycle on a Top Spin can vary wildly. If you’re riding a theme park version, especially one in the US, you can expect a very tame ride with only a couple of inversions over the course of a minute or so. A carnival will offer a cycle scores better than any theme park. Finally, a European funfair Top Spin will basically test the endurance of riders with multiple inversions and cycles approaching five minutes or more!

While cycles are different, they all contain similar elements in different orders and intensity such as:

Top Spin comes in four flavors with a different capacity for each one: 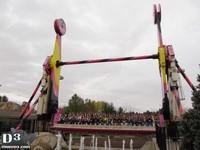 There are two traveling carnivals in the US that own Top Spin rides. The first is James E. Strates Shows’ Top Spin 1 model that has been traveling with them since 1997. The second is Deggeller Attractions who acquired a Top Spin 2 model in 2013.

A portable Top Spin 1 has a main load of around 121,000lbs. This makes the ride unable to traverse US roadways without costly permits (for reference, the maximum gross weight on US roads is 80,000lbs.) As I noted before, Strates Shows owns a Top Spin 1, however they are able to move the ride as they travel by railroad.

Top Spin at the Orange County Fair in 2013. The ride is owned by Strates Shows

Top Spin 2 at Astroland. This ride went to Funtown Pier in Seaside Park, NJ and was then bought by Deggeller Attractions.